Back when I was a helpless and totally incompetent freshman finishing my first semester of college, I was freaking out. I was about to leave my cushy dorm (yes, the dorm I lived in was pretty damn nice) and go back home with mom and dad. Love them, but they were not going to pay for any of my social life. I needed a steady summer income and I needed to find it fast. Since, like I mentioned, I had no idea what I was doing and/or looking for, my efforts seemed futile. That is, until, I discovered seasonal employment.

Well, my dad found it, but I can take the credit, right? He actually forced me to apply because a friend of a friend of a friend told him about it. He is one of those guys who knows everyone, so he got his hands on an application to work for the State of Rhode Island (my home state) as a park ranger. I was completely appalled. How could I ever look my friends straight in the eyes ever again? Was I going to have to prevent forest fires and carry a picnic basket around?! I had no idea what I was doing. The plus side to this whole ordeal was that since I had to go back to school in the fall, I didn’t have to worry about cutting ties with them because my employment would end by a certain date any way. But a park ranger…Oh my God. I was horrified.

Anyway, I ended up loving it. I started off at the bottom of the barrel as a maintenance person around the beach area of the state park that I was assigned. I was working alongside a group of about 10 other kids just like me, 40 hours a week, so you could say it was sort of like a “school” in a sense. Fun, drama, best friends, fights, you name it… but it was such a great time I came back the following summer…and the next, and the next, and the next.

So here I am today, five seasons later: a ranger who moved all the way up the ranks to the highest level that you can reach (which really isn’t that cool) BUT I do get a sick truck to drive around. Working there lit a fire to a side of me that I never knew existed. As a Journalism major, I never thought that Law Enforcement would interest me, but with the incidents that I did have to deal with, it gave me a little glimpse into that lifestyle. We would see everything from lost kids on the beach, drunk fishermen, couples hooking up in cars, couples hooking up in broad day light, fights between rival gangs, and we even had a murder last summer. Yeah, some intense stuff! I would be responsible for writing incident reports (and, I have to add, mine were the best. I guess my degree is good for something, right?) about anything that involved me interacting with the public. This was one of my favorite parts (besides all of the crazy regulars who know me by name).

Since I graduated in May of 2011, I didn’t have to worry about going back to school in September. The official dates of the season are April 1-October 31, so I worked until the end. The thought of my fun 40-hour a week job ending was nerve racking, especially because I knew that it meant that I would inevitably be broke. (Side note: I am still employed at the arena on the campus of my alma mater, but it wouldn’t be enough to sustain myself, so I also picked up a job at Macy’s to fill the void over the winter months.)

I also steadily kept up with my “real” job search during the off-season. I was able to go on a few interviews, but nothing came out of any of them. Although I knew I had this job to fall back on come April, I did want to find something that could jump start my career so I could retire my badge (yes, I have one) and become an adult.

This never happened. April 1st rolled around quicker than I had ever expected and I was thrown back into the park that has become a second home for me. It is like I never left. It is probably the best job I ever had and ever will had, only for the mere fact that it’s so lenient, fun, and there is a surprise around every tree (literally). It will be upsetting when I do have to leave one day (but at this rate, who knows if I ever will), but I will be forcing my kids to apply once they are old enough to do so.

As far as seasonal employment goes, it clearly has its ups and its downs. The most obvious downside is the fact that it’s not permanent. It is different from a “temp” job though because you do know when the end is coming and you can return once the time has come again. This is good for some people like teachers who have the whole summer off, but kind of sad for a post-grad who is looking for a full-time, real person job.

But who knows, maybe I will become a full-time ranger somewhere. Smokey the Bear, if you’re reading this, can you let me know if you have any openings? Thanks. 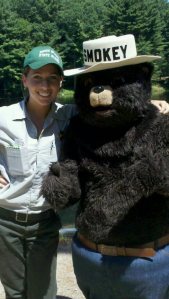 How I Lost 35 Pounds